A new city manager wants to promote economic development by dramatically increasing the number of building permits issued by the city’s Department of Consumer and Regulatory Affairs. The department normally churns out almost 3,500 permits a year or just under 300 a month; but the city manager believes there is slack in the system. Halfway through the year, he announced a target of issuing 5,000 permits before year’s end. No one is sure where the number 5,000 came from, but you have all the permit data, so it is time to check the target against the facts.

Step One: Identify your actual performance from the same time time last year.

Take a look at the historical data for permits:

Quick Tip: Practice yourself by copying and pasting everything in the table to an Excel spreadsheet. (Just remember to clear the "To Be Determined (TBD)" cells, since they are not real numbers).

Step Two: Generate the summary statistics about past performance.

From this quick look, you can do rough calculations to gauge whether the target is achievable if the department maximizes performance. If the department operated at maximum proven capacity (421 permits a month) for the remaining six months, it would issue a total of 4,483 permits for the year, still short of the city manager’s goal. But the department keeps getting better every year – the minimum, average, median and maximum keep increasing – so maybe there is room for dramatic improvement.

Quick Tip: How to Generate Summary Statistics This is not an exhaustive list of descriptive statistics, but it is enough to get started.

It seems clear from the basic descriptive statistics that the 5,000 permit goal is improbable, but year-over-year improvement makes it seem possible. Because summary-level statistics can often mask the underlying dynamics, it is time to confirm all trends and anomalies. Plotting the data in a chart is an excellent way to spot both. 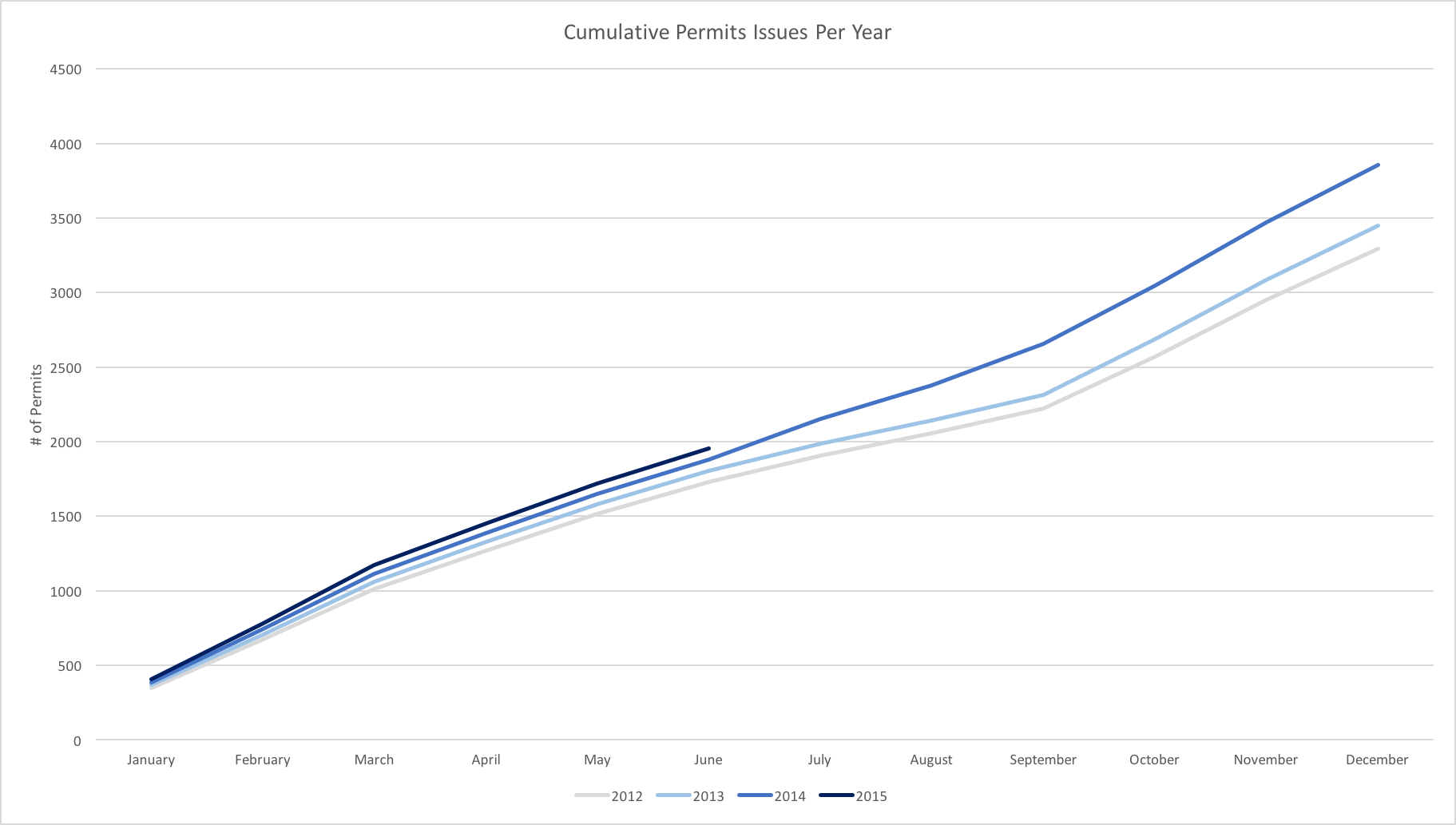 In the example above, improvement has been sustained every month for the past three years. However, it also seems September to December is one of the most productive times of year. So a key question to ask: “is productivity increasing at an increasing rate?” If so, there may be reason to hope 2015 will be even more productive than 2014. Changes in productivity can be assessed by calculating the slope (rise/run) of a line: the change in permits issued across time. Changes in productivity for September through December are calculated in the table below, which makes it clear productivity has continuously increased at an increasing rate. Therefore, it might be reasonable to assume we will come closer to the 5,000 permit goal through a natural annual increase in productivity for the remaining months.

However, since 2014 seems to behave differently than prior years, it is important to learn whether the increase in permits was an anomaly. Cumulative charts can sometimes hide the trends by month, so create a monthly view to spot any differences at a more granular level. In the monthly chart below, July, August and September were all clear anomalies in 2014. How big were the anomalies? July bucked the trend of decreasing permits from previous months and beat the previous July average by 53%. Avoid building targets based on potential anomalies. 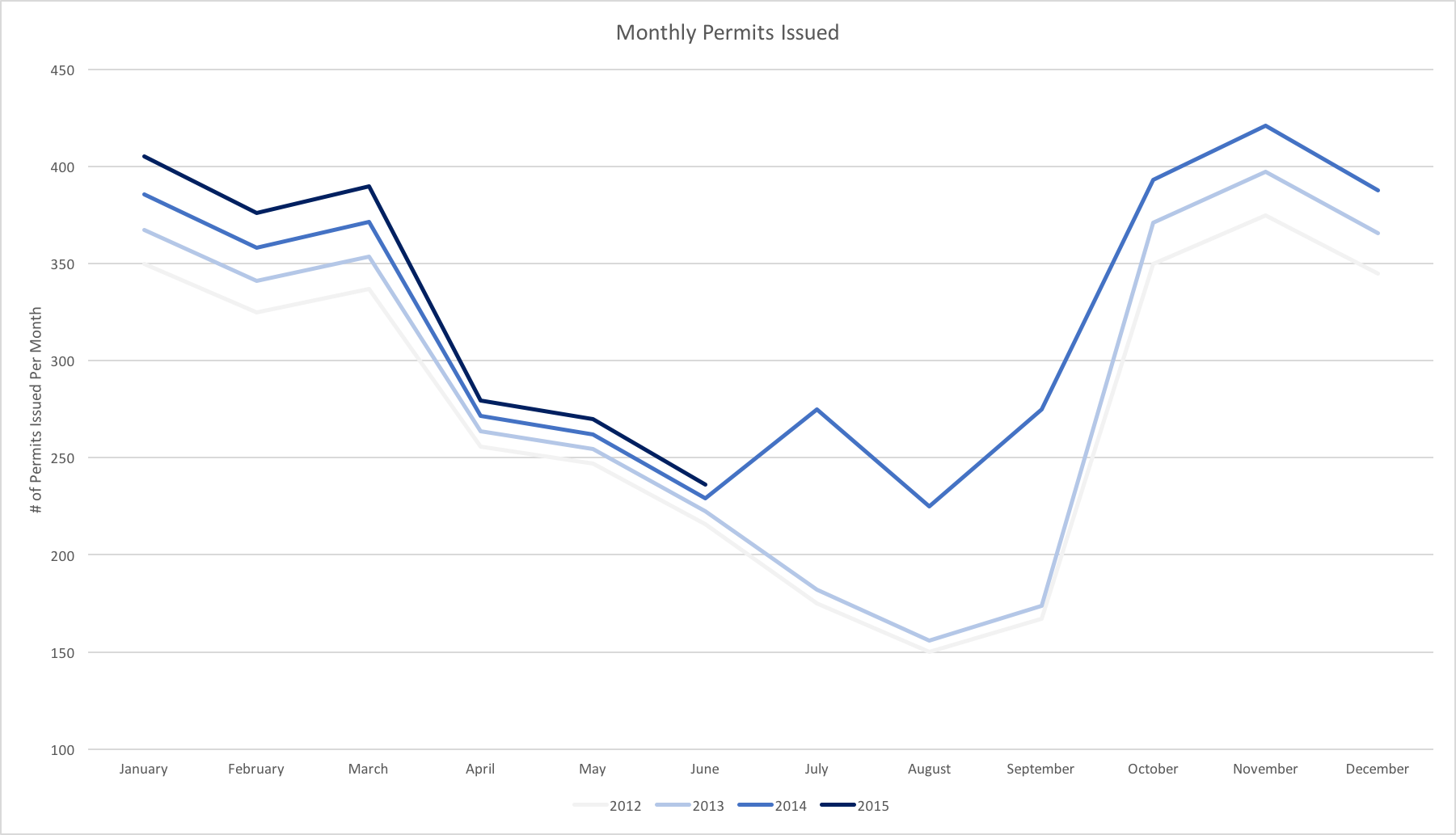 Step Four: Show (don’t just tell) what it would take to reach the overconfident target

At this point, you know the following: 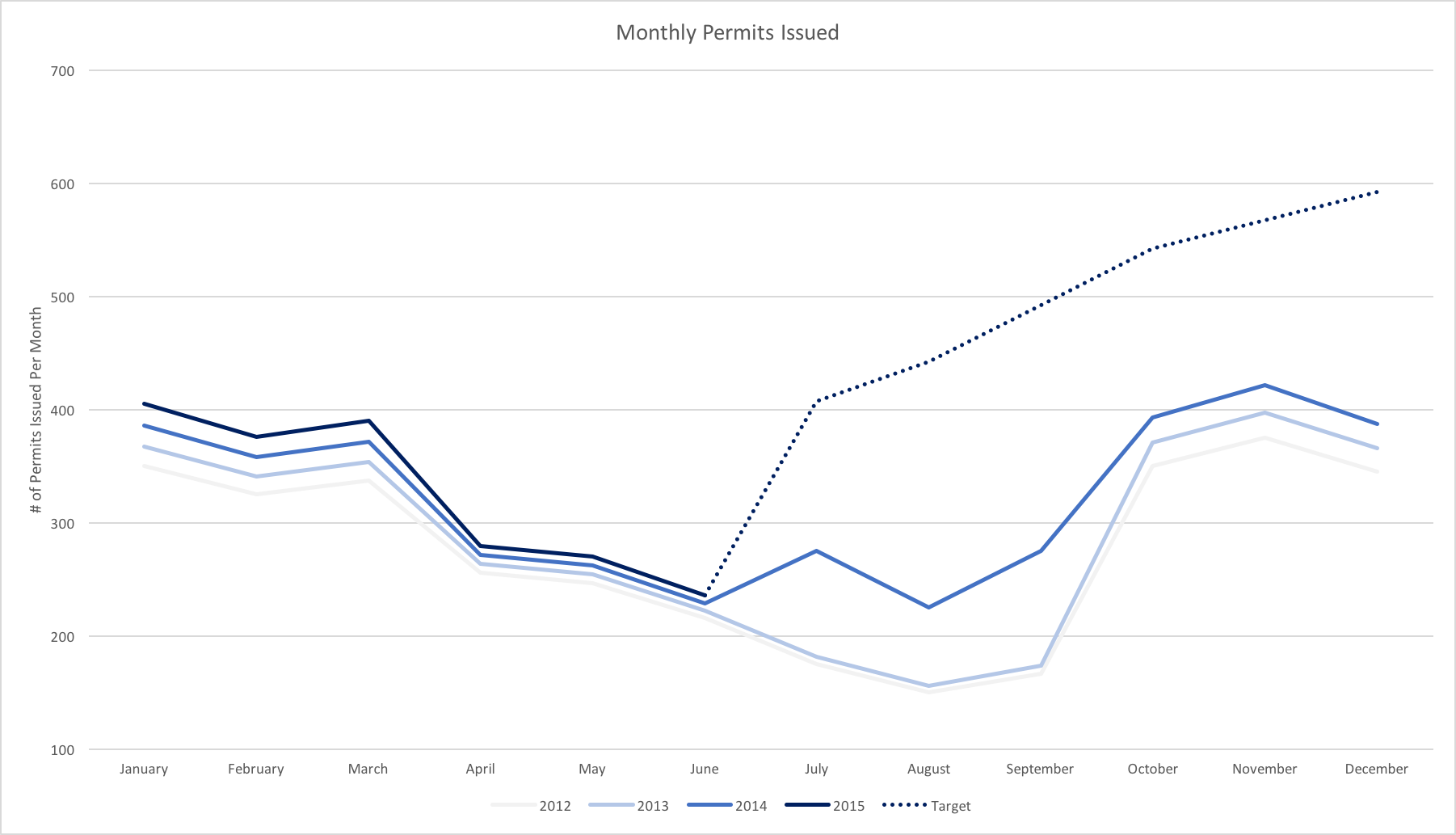 To reach the City manager’s target, the department would have to perform better than maximum proven capacity for each remaining month; beat last July’s performance by a significant margin (which was already an anomaly from previous years); and would have to sustain an increased rate of productivity (which is abnormal for the months of August and December). Without a change in the way permits are issued, 5,000 permits in one year is an impossibly high target.

The reasonable city manager, persuaded by the statistics, will likely want to find a compromise target: one that inspires improvement while accounting for reality. To find the middle ground, you do a few simple things: 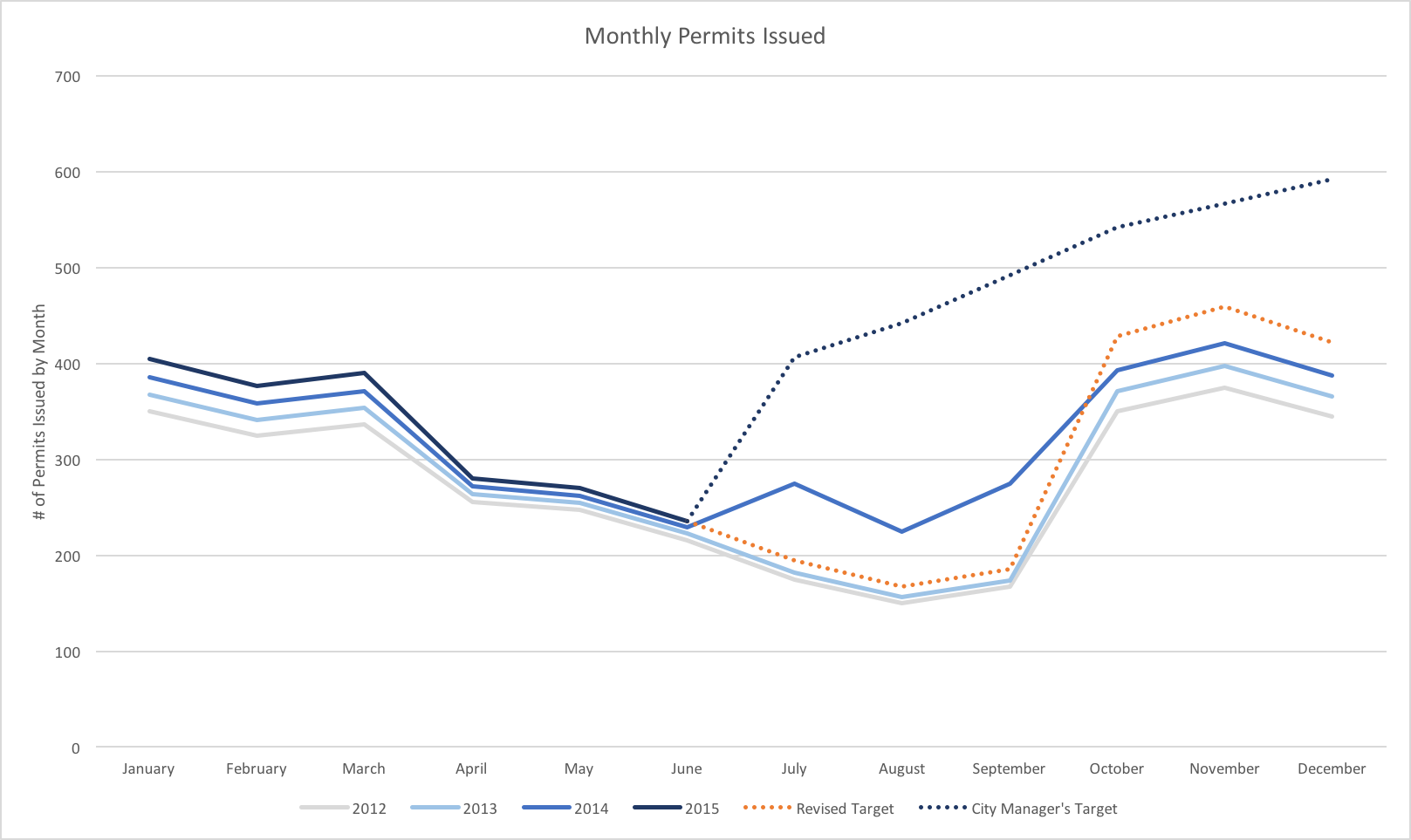 In this example, the revised forecast assumes a 3% increase in productivity for each remaining month, but applies the factor to the 2013 totals in July, August and September (to account for the anomaly in 2014) and then applies the 3% productivity increase to 2014 totals for the remainder of the year. The end result: the cumulative target for 2015 is 11% higher than 2013 and is based on a historically accurate productivity pattern. The target falls within 1% of 2014’s actual performance, which has a few months discounted as anomalies. If July’s performance mirrors 2014, the entire target for 2015 can be easily readjusted. 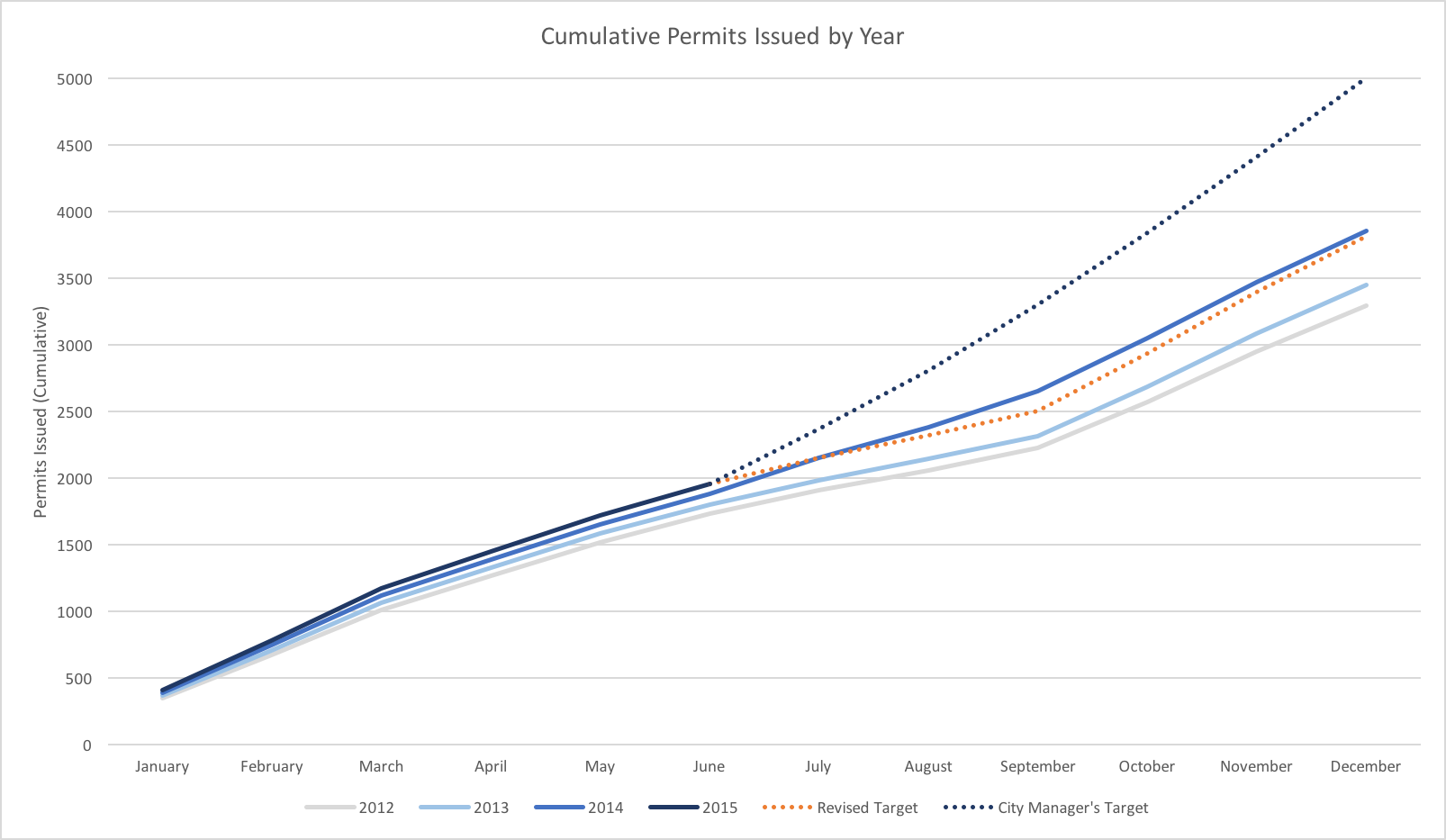